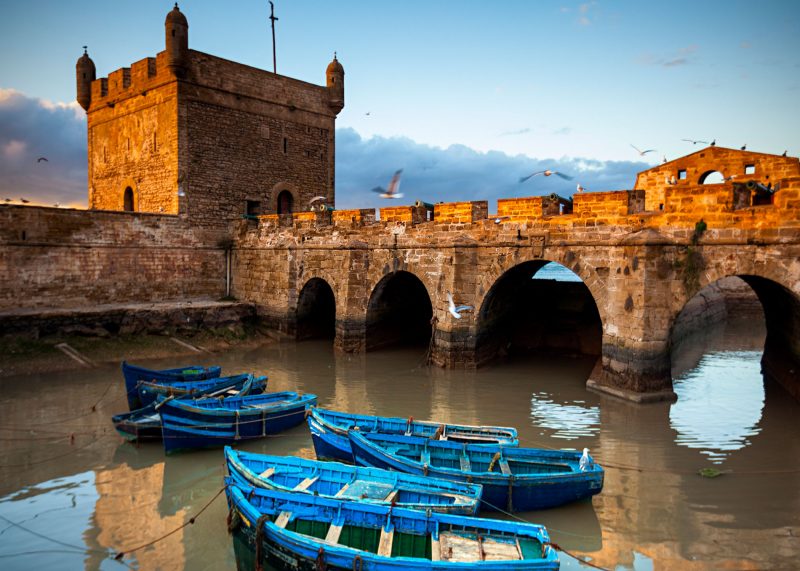 Essaouira-Mogador, the bride of the Atlantic

With notched walls, the whisper of trade winds, homes with white and blue facades – thecolors of ocean foam and waves –Essaouirahas earned the nickname “Bride of the Atlantic”.

The coastal city once known as Mogador is a place where the good life and water-oriented pastimes go hand in hand. Take a quiet walk in the shade of its ramparts, which also stand in for the walls of Astapor, the red city on the television series “Game of Thrones”. Climb to the top of them and retrace a watchman’s rounds: from here you can see the Iles Purpuraires and the hawks and seagulls that soar over the nature preserve. In the distance, surfing, windsurfing and kite-surfing fanatics can’t get enough of the quality winds!

Your walk will lead you to the fishing port and its animated sailors. Not far from there, the fish market entices with the night’s haul of fish and seafood. The interlaced alleys of the medina await you in the town center. This UNESCO-listed medina is one of the finest in Morocco. Finally, each summer the city is overtaken by music as the Gnaoua festival celebrates the marriage of North African and sub-Saharan rhythms.

The Mogador eco-resort is the perfect hotel. For several years, Morocco has been aggressively implementing sustainable tourism principles. This resort is part of the movement, as are the area’s beaches, whose “Pavillon Bleu” seals attest to their quality.

Come to relax, wear yourself out and be culturally enriched: the mesmerizing Essaouira-Mogador is a destination that offers 1,001 possibilities! 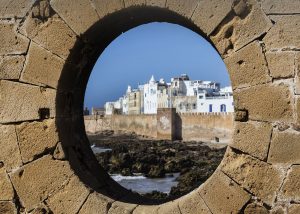 Essaouira, city of art and history

Essaouira, the “well drawn” city, holds plenty of surprises. At the end of an alley, you may find a curio, a cultural vestige or a gallery featuring the work of a contemporary artist.

The city gets its special character from its ramparts. They are pierced by monumental doors that stand asworks of art and defense tactics. The ramparts are flanked by two citadels, the Kasbah squala and the Port squala. To get your first look at the city, stroll in the shadows of these historic walls, then go deeper into a maze of alleys and discover the medina. Like the whole city, and like the former Mogador now known as Essaouira, the medina is a mix of Western and Eastern influences. The minaret of Ben Youssef Mosque rises above and many consular homes dot its streets.

Its standing as a city at the crossroads of civilizations also makes Essaouira a beloved place for artists. There are various galleries to celebrate beauty and creativity. Check out the artists’ café, MareaArte Bleu Mogador and the Sidi Mohamed Ben Abdallah Museum, which honors the region’s history of craftsmanship and folk traditions.

The myriad beauties of Essaouira are sure to blow you away!