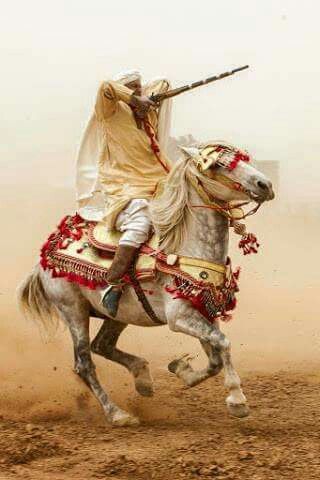 Or Fantasia is a traditional exhibition of horsemanship in the Maghreb performed during cultural festivals and for Maghrebi wedding celebrations. “Fantasia” is an Orientalist name from the French, the actual traditional term derived from the Arabic word baroud, meaning gunpowder. It is present in Morocco, Algeria, Tunisia, Libya, Mali, Niger, and Mauritania. 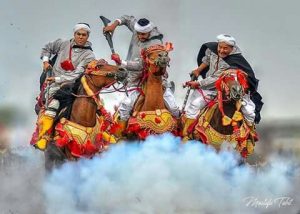 The performance consists of a group of horse riders, all wearing traditional clothes, who charge along a straight path at the same speed so as to form a line, and then at the end of the charge (about two hundred meters) fire into the sky using old muskets or muzzle-loading rifles. The difficulty of the performance is in synchronizing the movement of the horses during acceleration of the charge, and especially in firing the guns simultaneously so that one single shot is heard.

The horses are from Arabian and Barb or a mix of the two breeds.

The fantasia is considered a cultural performance and a kind of martial art; it also symbolizes a strong relationship between the man and the horse, as well as an attachment to tradition. 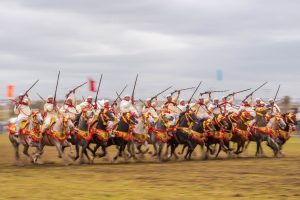 In Morocco,fantasia performances are usually during local seasonal, cultural or religious festivals, also called moussem (“saint’s day festival” in Arabic). One such example is the chellalate Moussem and the Cherry Festival in Sefrou. Chez Ali, a show-based restaurant in Marrakech offer a fantasia as part of the entertainment.