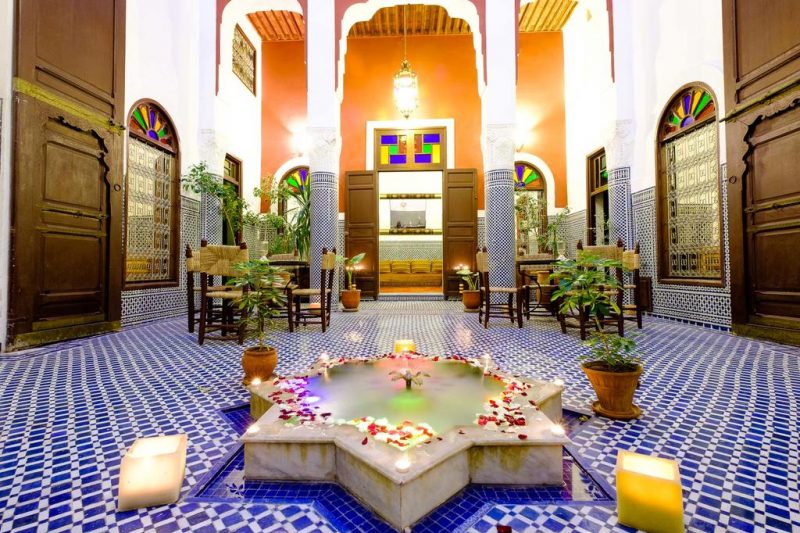 The Riad is the Moroccan traditional house, normally with two or more stories around an Andalusian-style courtyard that contained a fountain. Riads were the stately city homes of the wealthiest citizens such as merchants and courtiers. 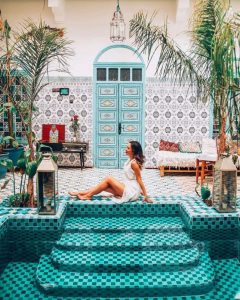 As you approach a riad from one of Morocco’s narrow, labyrinthine streets, you will likely notice that each door in the grey stone and plaster walls looks fairly similar. The doors are usually made of a carved wood with a tiled step entrance. Some doors may have their own personality; some boast large, handcrafted knockers while others are decorated with large rounded nail heads. When you open the door to a riad, you will enter into a hallway that does not yet permit you a glimpse into the heart of the house. This ‘layered’ effect of walls, doors, and hallways is both an historical privacy feature for the residents of the house…allowing the outside door to be open to the public, while offering protection for those within…and also creates a sound barrier against the noise of the streets. As you pass from the bustling streets, through the nondescript exterior and into the central courtyard/garden of a riad, you may be surprised and delighted by tranquil, elegant beauty you find within…riads are often described by visitors as “diamonds in the rough!” 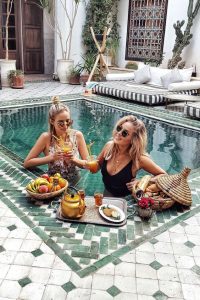 The riads were inward focused, which allowed for family privacy and protection from the weather in Morocco. This inward focus was expressed with a centrally placed interior garden or courtyard, and the lack of large windows on the exterior walls of clay or mud brick. This design principle found support in Islamic notions of privacy, and hijab for women. Entrance to these houses encourages reflection because all of the rooms open into the central atriumspace. In the central garden of traditional riads there are often four orange or lemon trees and often a fountain. The walls of the riads are adorned with tadelakt plaster and zellige tiles, usually with Arabic calligraphy of quotes from the Quran.

In addition to the spacious central courtyards and inviting shared rooms, most riads are made up of six to eight bedrooms of traditional design with en suite bathrooms. Each bedroom is a unique size and shape, with it’s own distinct features. Some riad rooms are positioned to open onto or overlook the central courtyard, while those situated on the higher floors may look out over the city, some may boast access to the riad’s rooftop terrace. Moroccan riads are rather infamous for their narrow, winding staircases, which most often lead from the riad’s courtyard and shared spaces to the bedrooms located in the higher floors.