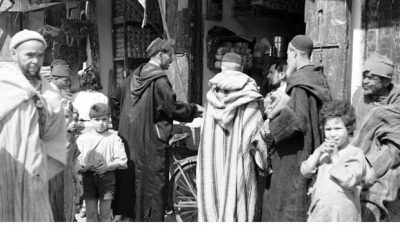 A mellah (Hebrew: מלאח‬, the Arabic meaning “salt spring” or “salt marsh” which was the area of the first Jewish settlement in Fez) is a walled Jewish quarter of a city in Morocco, analogous to the European ghetto. 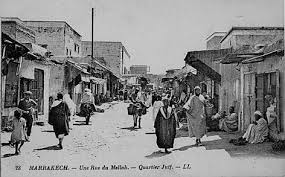 Jewish population were confined to mellahs in Morocco beginning from the 15th century and especially since the early 19th century. It first was seen as a privilege and a protection against the Arabs’ attacks in the region, but with the growing of the population, it then became a poor and miserable place. With the colonisation and the arrival of the Europeans at the end of the 19th century and the beginning of the 20th century, the Mellah opened and gave new economical and social possibilities to the Moroccan Jews. 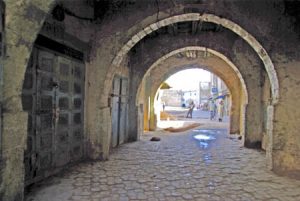 In cities, a mellah was surrounded by a wall with a fortified gateway. Usually, the Jewish quarter was situated near the royal palace or the residence of the governor, in order to protect its inhabitants from recurring riots since its inhabitants played a vital role in the local economy. In contrast, rural mellahs were separate villages inhabited solely by the Jews.